The HB Kruger: A cyclist for all surfaces online store is brought to you by Dis-Chem Living Fit (A division of Dis-Chem Pharmacies).

HB Kruger: A cyclist for all surfaces

Hendrik “HB” Kruger is one of South Africa’s most versatile pro cyclists. The Pretoria-born rider teamed up with childhood friend Shaun-Nick Bester in 2021 to ride for team Alfa Bodyworks.

“It was actually Shaun-Nick and his father who introduced me to cycling and ignited my passion for the sport,” explains HB.

Both pro riders were friends at school, and a weekend sleepover at Shaun-Nick’s house when HB was 13 resulted in his first cycling experience.

“The Bester family is extremely active and they went for a ride that weekend. They had a spare bike, which I used.”

After returning from his first training ride, the Besters invited HB to a race the next day.

“It was only the second time I had ever put on a helmet to ride but I finished fifth or sixth. I thought ‘that was lekker’.”

While HB kept riding throughout his school career, he still played many other sports like rugby and athletics. It was only when he turned 17 that he decided to put all his focus into cycling.

READ MORE | Shaun-Nick Bester: A rider for all seasons

“I focused on road cycling after school and secured my first pro contract in 2012 with Team Bonitas.”

HB’s ultimate goal was to ride for a Pro Tour team in a Grand Tour. He went overseas to chase his dream and rode for a French amateur team in 2013 and 2014.

“I started track cycling while in Europe to improve my road cycling and found that I had a knack for it – I podiumed in my first few races.”

The benefits track cycling delivered to his road riding were also very apparent, which prompted HB to keep the discipline in his training regimen as he prepared for races.

That decision paid massive dividends in 2015 when HB had his breakthrough year following impressive performances in numerous national and continental track championships.

“I placed first in the individual pursuit in both the National and African track championships in 2015. I was also part of the team pursuit that won the African Track Championships title.”

HB went on to have a successful African Games that year, placing first with his teammates in the Team Time Trial, fifth in the Time Trial and ninth in the road race. Impressively, HB finished as one of the top African riders in the UCI points ranking that year.

“It was definitely a breakout year for me but, despite my success, I had to make a decision about my career trajectory.”

The cost of living and racing overseas has always been prohibitive for local riders, and securing contracts on Pro Tour teams is hugely competitive.

“If you didn’t live and race often overseas, it was hard to get noticed. And my age didn’t benefit me either.”

That’s when HB decided to switch his focus to mountain biking and return home to race in South Africa’s growing MTB scene. He made Paarl in the Western Cape – the epicentre of MTB in SA – his home base.

“Mountain biking in South Africa was a prolific drawcard and offered opportunities to compete against the world’s best at races like the Absa Cape Epic.”

HB adds that the calibre of rider that trains in the Western Cape from early January is also world-class as the best riders travel to the region to prepare for the Epic.

“It is an opportunity to ride more with the best athletes in the world. And people don’t realise how competitive the racing is among the elites.”

The Cape Epic has become HB’s main goal. “It’s the mountain bike world’s grand tour. For any mountain biker, the Cape Epic is the ultimate race. Standing on the podium is a huge accomplishment.”

Compete with the best

While HB hasn’t given up on his road racing ambitions, mountain biking allows him to push himself and compete at the highest level without emptying his pockets.

He continued to compete across track, road and mountain biking events in 2021 and had a successful season for team Alfa Bodyworks.

HB says it is awesome to be racing again. “I Zwifted myself to death during the lockdown. As an athlete who uses racing as part of my training plan to build up to my A race, I struggled to do all my training and get the right conditioning without many events.”

HB explains that he needed to switch his mental game and challenge himself in different ways to keep training through the pandemic. “I chased Strava segments or tried to improve my power metre data on specific routes or climbs.”

HB competed in numerous events in the last few months of 2021, including big events like the Cape Town Cycle Tour, 947 Ride Joburg and the Absa Cape Epic.

A season highlight for HB was finishing second overall at the Tour de Kap and winning the King of the Mountains jersey. He planned to compete at the Paarl Boxing Day Track Race to finish off his 2021 season. 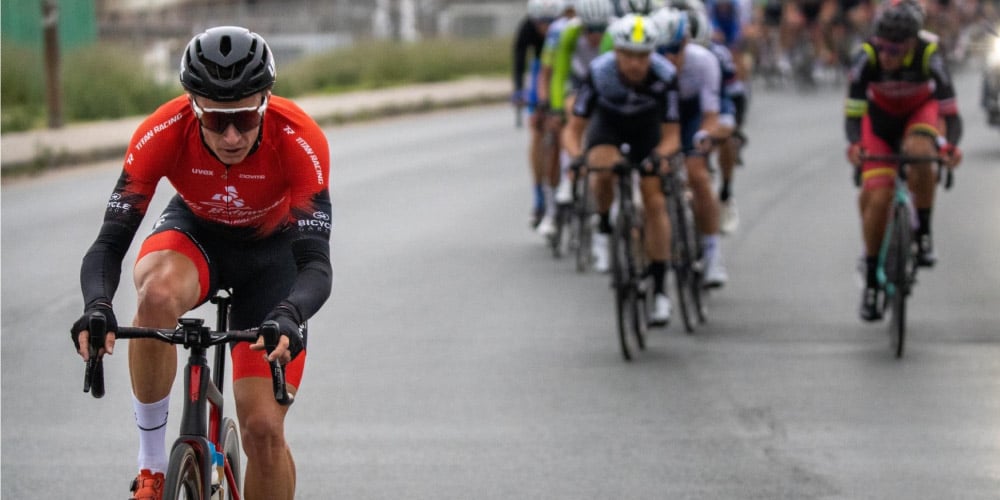 Looking to 2022, HB says the Absa Cape Epic remains the main goal. “It is a monster route with the most elevation per kilometre in the race’s history. It’s going to be a major challenge.”

In preparation, HB trains between 18-25 hours a week, depending on which training phase he is in. He is currently working under the guidance of Dr Mike Posthumus from Science2Sport.

“Mike applies a very scientific approach to my training, which has delivered consistent improvements since 2016.”

In the build-up to race day, HB typically has four high-intensity sessions a week. Off-season training typically includes base miles, some gym work and running.

From a nutritional perspective, HB says he keeps it as simple as possible and tries not to overcomplicate things.

“As you develop as a rider, you tweak your basic approach with things you find that work best for you. However, the fundamentals remain the same.”

As a team Alfa Bodyworks rider, HB incorporates the following USN supplements into his nutritional plan: